Note: Free Poison was written in response to an editorial, Solar, without intrusive regulations, written by Le Templar, Communications Director of the Goldwater Institute and published in the March 8th, 2010 edition of The Arizona Republic. 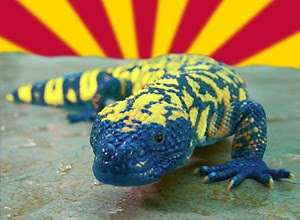 In a fog, even the myopic can seem farsighted. One hears the echoes of the Goldwater Institute’s delusional mantra of “free market” everywhere in Arizona; in casual conversation, in the papers, in the shallow bluster of political radio, in the state legislature, and in the chambers of the Arizona Corporation Commission. The Goldwater Institute is greatly responsible for this persistent and pernicious oversimplification and misdirection.

The central problem with energy in Arizona is not regulation, per se, but rather the vampiric economics that have resulted from atrociously poor regulation.

Arizona’s position at the center of the world’s sustainable energy future has long been impeded by economic manipulations that were spawned in order to artificially support a collection of economically unsustainable energy sources squandered in order to power an even more spectacularly unsustainable ‘growth machine’. Whether from the earth or from its citizens, Arizona suffers most from a chronic habit of extraction.

Arizona’s single, sustainable source of power -– solar energy -- has been long repressed by utility rate schedules that have placed solar at an economic disadvantage in our nation’s sunniest state. These same rate schedules have also defeated the value of energy conservation; so that today, the Arizona desert swelters under the weight of a burgeoning population of energy spendthrifts inhabiting a landscape of increasingly costly, shabby boxes.

These circumstances exist out of both intention and ignorance. The solar industry requires subsidies today, not because of the real economics of the technology, but only because of the enormous imbalance that results from both the apparent and the hidden subsidies given to traditional energy sources.

Of all the many ways the Goldwater Institute is wrong, one of the most fundamental is their focus on energy commerce. The essential problem is not one of commerce; rather, it is a problem of accounting.

The hidden taxes that have been perpetuated by Arizona’s so-called “utility-rate regulators” continue to drain its citizens. Despite long warnings, this very basic problem remains unaddressed.

Still, these problems are not intractable. First, the delusion of a “free market” must be discarded. Where extraction is inherent, there is no “free”. Such fantasies come only from ignoring the realities of ecological constraints. Until the reptilian thinking propagated by the Goldwater Institute slithers back into the shadows and under the rocks to avoid being trampled, Arizona will remain addled and threatened by further poison.

Second, regulation must be exercised to create a transparent, fairly accounted, and equitable economic system. This must begin by correcting the structures of the utility rate schedules under which the solar industry and Arizona’s citizens have so long strained.