The Scales of Int ermi tten cy (Part I) 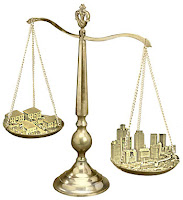 Even though cost can be dismissed as an argument against the rapid adoption of solar energy in the sunniest regions, and the argument that subsidies are required in order for solar energy to be economically competitive has been shown to be a red herring, those who deprecate solar energy also recite what might at first appear to be a cogent argument against its broad adoption.

The sun rises and sets. Clouds billow and drift. In any particular locale, the sun is an intermittent source of energy. Furthermore, it is not yet a simple thing to store the sun’s immediate energy for later use, or to transport it to the darker regions of the globe. We billions now depend on the ready availability of the sun’s energy that was stored below our feet in very finite supply by ancient geological processes.

In a world where the unthinking action of simultaneously flipping a million switches instantaneously delivers light to a million places, and where almost no local energy generation or storage exists, the dispatchability of an energy source has great value. The quality of an energy source to be dispatched at a moment’s notice is most important in meeting peak energy demands; whether these inordinate demands are reasonably controlled, or encouraged instead.

At a time when solar energy in sunny Arizona comprises an infinitesimal portion of the energy mix, it is important to ask, at what portion of the community’s energy mix does the intermittency of solar energy have a real effect at the community’s scale of consumption? When more than two orders of magnitude more energy is delivered from traditional toxic sources than from clean solar energy, there can be little intermittency effect in aggregate. Even at the future slender levels encouraged by the Renewable Energy Standard and Tariff (REST) rules there can be little effect.

Beyond the prevailing comedy of scale, lurk the practical aspects of intermittency. A single overhead cloud may occlude the sun over a building or a neighborhood. A weather front may gray the sky to the horizon for days. These are less frequent occurrences in some places than in others. Sunny Phoenix, Arizona receives annually 85 percent of possible sunshine. Two-thirds of all summer days, and half of all winter days have clear skies. The greatest number of consecutive days with no sunshine occurred over only three November days more than forty years ago in 1965.