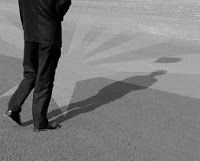 We’re talking hot stage lights and big, bright bulbs streaming sharp shafts of white light into the night sky. It may seem illogical to juxtapose solar energy with the metaphor of such a luxuriant glare. Yet, in this case, the metaphor’s juxtaposition tempts with a delicious, irresistible irony.

Rate Crimes has presented critiques of energy policy that are based on economic analyses of solar energy. These critiques have focused on the repressive and obscure policies of the electric utilities, government, and other bodies of influence in Arizona. The purpose of these analyses and commentary is to expose how and to understand why the rapid adoption of solar energy in the sunniest climes has been delayed, if not defeated. Policy makers certainly have earned criticism, but others have also contributed to the defeat of solar energy. In a survey of culpable parties, it would be remiss to omit mention of the foibles and failings of the solar industry. The first to gain mention deserves the ‘spotlight’ unlike any other.

The sun defeats the flame of any spotlight. Apparently, a fool can still make a spotlight defeat the sun.

Yes, you are correctly seeing that. Someone actually designed a set of high-intensity lamps so that they shade a solar array. This solar array is losing significant energy. It is also possible that the life of the shaded modules will be shortened.

Normally, one might assume that the solar energy company that designed and installed this system was unaware of what must have been a later, unexpected ‘modification’ by another party. However, in this case, this image was published on the solar energy company’s website homepage as one of a series of images advertising their portfolio!