An Accident of History 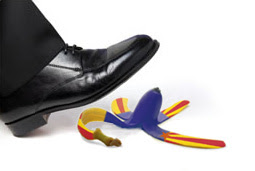 A decade ago, in response to my increasing awareness of our society’s problems of economy and sustainability, I shifted my professional focus from systems analysis, architecture, and design towards renewable energy. As both a long-time resident of sunny Arizona and an electrical engineer, I was naturally attracted to solar energy.

In my first position in the energy industry I was fortunate to work closely with the most experienced solar engineer in Arizona. Not only was I able to rapidly gain a wealth of knowledge through observation and practice, but my mentor was also a talented and generous teacher.

As my knowledge of the industry grew, I began to recognize the systemic problems that prevent solar energy from thriving in and around The Valley of the Sun. Initially, I had little more than an intuitive glimpse of these problems. The journey towards understanding the pervasive nature of these problems began early this decade with a simple and somewhat selfish question, “Does it make good economic sense to remain in the solar energy industry?”

The attempt to answer this question led to many long evenings with papers, books and spreadsheets. From this work, an economic model began to develop. The answer that began to emerge was encouraging.

When the results of the analyses were first presented in 2003, conservative numbers were used for the projections. One exception to this cautious practice was the aggressive $6.50 installed cost per solar watt that was employed in Money from the Sun. This article was featured in the 100th issue of Home Power magazine that was published in April of 2004. The intent of using that figure was to highlight a tipping point for the price of solar energy. The cost of solar energy had been trending down and $6.50 per watt was near the low end of costs in Arizona at that time.

One parameter that was always kept conservative was to project only a 2 percent annual average increase in utility electricity costs. Because the avoided cost of energy is a key determinant for the value of the solar investment, conservative estimates were rigorously maintained.

At the time, few expected that within a few years our financial system would nearly collapse, or that the costs of energy in Arizona would rise so quickly and so dramatically.

When Money from the Sun was published in 2004, the real cost of energy in Arizona was at its lowest in over a decade. This low price would soon prove to be very temporary. Within a year, prices began to trend upward as Arizona began to approach a looming energy gap. 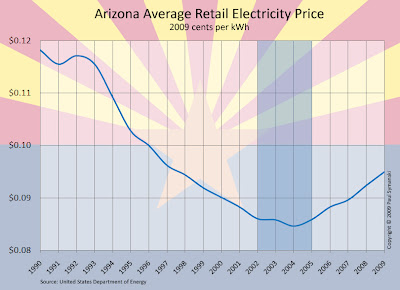 It may have been an accident of history that my initial work in solar economics was done during the historical low for energy prices in Arizona. It is no accident that solar energy remains chained to the anchor of toxic energy interests.