Money from the Sun

The energy regime includes nearly every entity involved in energy provision: from equipment manufacturing and supply, to mining, to transportation, to utilities of every ownership cloak, to transmission operators, to regulatory bodies, and to policy makers and other tax beneficiaries. Not only does the regime suffer enormously from professional deformation, but it embodies an enormous inertia.

Early this decade, when I set out to answer a simple question, I had no expectation that I would come to feel the cumbrous weight of this unwieldy mass. I had been working in the solar energy industry for several years. At the time, I was working for an engineering firm. Despite the thrilling work and the rewards of ethical labor, I did not see evidence of financial reward in the neighboring industry. I was also concerned whether our customers were realizing economic value. In order to assure myself, I developed an economic appraisal.

As I examined the LCOE approach, I recognized that it was seriously flawed. Several critical factors of valuation were being omitted. Furthermore, the paradigm of measuring value only from the perspective of energy vendors was fundamentally erroneous.

Instead, I developed a relative value model from the perspective of the home or business owner. After all, they are the market for energy. The model compared an investment in on-site, supplemental solar electric energy with traditional investments. The model incorporates the reinvestment of savings and of investment returns.

The results of this analysis were very interesting: It showed that in Arizona, with the state’s extraordinary solar resource, and with existing incentives, a low-risk investment in solar energy outperformed the stock market*.

When more fairly compared with low-risk traditional investments (e.g. T-bills), even without incentives, the solar investment frequently outperformed them.

In 2003, I began sharing the results of this analysis in various public forums. An article introducing this approach was published in April of 2004 as the premier cover story in the 100th issue of Home Power magazine. 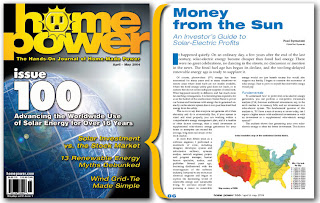 However, this investment analysis was only the beginning of a more interesting analysis.

* based on the historical, long-term, annual average returns of the S&P 500.
Posted by Rate Crimes at 10:56 PM