Where the Sun Does Shine

The American Sun Belt is replete with ungathered riches. Here, the term ‘Sun Belt’ refers not so much to the easy-living retreat strung across the tier of southern states made possible by air conditioning fueled by burning coal. Rather, the term best applies to the Western deserts where the power of the sun strikes with a bright, steady force. 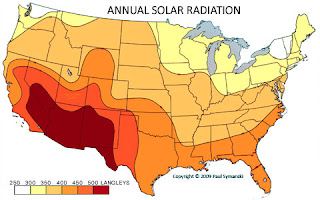 Too few yet recognize this wealth, but it is certain that our children will do so. Whether future generations will realize this wealth depends on you . . . now.

Arizona is at the center of the Sun Belt. The state enjoys an abundance of sunshine. It receives about twice the average annual solar irradiation as Germany or New Jersey. 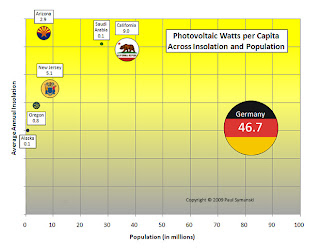 Yet, California’s immediate neighbor, Arizona, even with its extraordinarily abundant resources, and with its major cities centered under a blazing sun, delivers only a meager 3 watts of PV per capita.