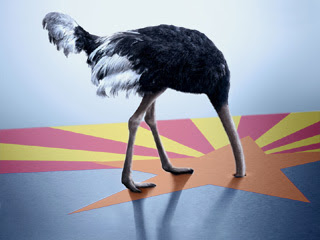 The version of energy efficiency that is promoted by nearly all interested parties in Arizona neglects the central economic constraint imposed upon Arizona’s exploited energy market.

Even though the Rate Crimes blog was created only in May of this year, its central message – that Arizona electric utility rate schedules repress the value of solar energy and energy conservation in the nation’s sunniest state – has been declared in a variety of media and venues over the past half decade.
Yet, five years after the message was first broadcast, even the strongest advocates of solar energy and energy conservation remain inattentive to this fundamental economic issue. Repressive rate schedules have denied Arizona a sustainable future and have led to the state’s failure to become the prime catalyst of the world’s solar energy future. Advocates of all cloths remain focused on limiting energy price increases while ignoring both the inequities inherent in the existing rate schedules and the dangers of hiding the real immediate and future costs of toxic fuels.

Congrats! Thanks to those of you who encouraged the Salt River Project (SRP) to increase their commitment to energy efficiency, their board voted to spend millions more on energy efficiency programs and renewable energy resources at no additional cost to ratepayers. [emphasis mine]

This is certainly a success and could not have been achieved without the support of SRP ratepayers and others. As we told the media, "By voicing opposition to the proposed SRP rate hike, ratepayers scored and ended up winning more stabilized prices, greater reliability and a reduction in infrastructure costs through improved energy efficiency."

While the recent SRP vote is a victory, there is still much more SRP, Arizona Public Service, Tucson Electric Power and other utilities in Arizona need to do to increase energy efficiency. I look forward to working together to make this happen.

If the balance of “millions more” is not to be pried from ratepayers but rather to be derived from the efficiency programs, one must wonder why the utility did not long ago implement such efficiency measures and enjoy the profits. Why was it necessary for ratepayers to “voice opposition to the proposed SRP rate hike” before these efficiency programs were initiated? Why does the utility need to “increase their commitment to energy efficiency”? Should they not already be fully committed to energy efficiency for both their own benefit as well as the public’s? Would not having long ago provided honest rates and rate schedules been more than enough of a commitment to this end?

While Arizona energy prices remain artificially curbed, and the utilities’ rate schedules continue to repress the value of solar energy and energy conservation measures, then to impose belated efficiency programs is only a reactionary symptom of the byzantine economics of poor central planning. This continuation of a debilitating exercise in market capture imposes yet another debt burden on our children.

Advocates for energy efficiency, solar energy, and sustainability would do well to pull their heads out of the caliche and shift their priorities towards resolving the fundamental issue of repressive rate schedules and to begin transferring our investments into truly sustainable solutions.