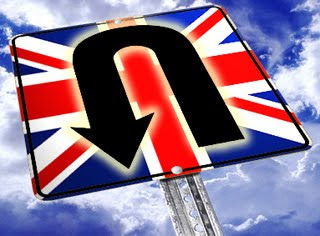 In The Followers of Texas was explained the misstep of the Goldwater Institute’s policy paper, Opening the Grid: How to Recharge Arizona’s Electricity System for the 21st Century in citing as an example of success Texas’s experience in restructuring and “deregulating” their electricity industry.

The policy paper uses more than Texas as an example to promote its agenda, “Texas, Pennsylvania and Britain have recently restructured their electricity industries to achieve remarkable improvements in both conventional and renewable generation capacity.“

Yesterday, the Financial Times reported that the United Kingdom government’s Committee on Climate Change recommends that the deregulation of the UK energy market should be reversed. The article quotes, "We are questioning whether we have gone too far in deregulating the energy market," said David Kennedy, chief executive of the committee, which advises the government on cutting greenhouse gases. "The strongest way [to achieve lower emissions from utilities] is mandatory investment in low-carbon power." [emphasis mine]

If the Goldwater Institute instead would invest the money spent on litigation on clean energy generation and energy efficiency it would be a lasting gift to Arizona’s citizens.