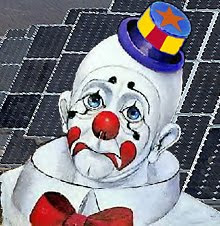 The President recently bemoaned the state of discourse in our society, "I am concerned that if the direction of the news is all blogosphere, all opinions, with no serious fact-checking, no serious attempts to put stories in context, that what you will end up getting is people shouting at each other across the void but not a lot of mutual understanding," said President Obama.

The preview was posted on R-Squared at 5:26 PM that evening. As of today, there have been just over 50 comments. Half of these were responses from Rate Crimes. The other half was contributed by eight others.

It is difficult to recommend the commentary except as an example of reactionary, dismissive, misrepresentative, and denigrating blather that was responded to as respectfully as possible. The hope had been to subject the Rate Crimes analyses to a crucible. Sadly, the comments for the preview consist almost entirely of unconsidered and ad hominen attacks. The first comment was a knee-jerk response that was posted only a little more than an hour after the article’s publication. This first commentator very obviously did not delve into the Rate Crimes analyses before he felt the need to cast aspersions, misrepresent this blog’s message, and ask a question that was answered in 2004. Throughout two days of commentary, this willful scramble towards ignorance barely hit a hurdle.

It is certain that there are many thoughtful, learned, and astute readers of the R-Squared Energy Blog. The blog consistently offers well-considered analysis and commentary on a wide range of topics related to energy and sustainability. But what thoughtful readers would foolishly interject themselves into the midst of a negatively noisy commentary proffered by a conspiracy of dunces? Only a few brave souls dared to venture a thoughtful comment and the only benefit Rate Crimes gained from the commentary was from an astute observation of a mislabeled graph.

Much careful labor has been done to develop the Rate Crimes analyses. Too often, this labor has been performed in solitude and without the invaluable gift of shared effort, or even thoughtful criticism. Only recently has there been published an important validation of the methodology that I developed earlier this decade. Even though my expectations for enlightenment from a blog posting were not high, I had hoped for a response more valuable, or even more thoughtful than an unsubstantiated, “I think you and your blog are exceedingly silly.”

The recent events surrounding the health care “debate” have exposed our society’s civility gap. Too many are ready to deliver judgment without careful consideration for either persons or ideas. The response you are now reading was intentionally delayed in order to gain perspective and to give careful consideration to an issue that is perhaps even more important than the hardly-silly issue of the long-standing repression of solar energy.

Rate Crimes exists to bring transparency to the economics of energy. All thoughtful commentary is welcome.