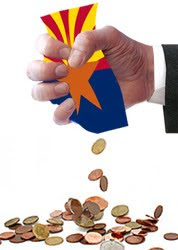 A special, existential absurdity accompanies the state of being a citizen of Arizona. The great, swelling, air-conditioned cities of the Southwest each attracts denizens with particular promises. The tag lines are expressive, “What happens in Vegas stays in Vegas”, “Entertainment Capital of the World”, “The City Different”, “America’s Finest City”.

In Arizona is proclaimed, “The Valley of the Sun” and “The West's Most (Mid)western Town”. Living in Arizona comes only with the promise of easy winters amidst a prosaic culture. To those familiar with the Arizona milieu, there can be little wonder why Harlan Ellison’s 1970’s classic, A Boy and His Dog was set in a barren, post-apocalyptic Phoenix underlain by an insipid, predatory, subterranean Scottsdale; and why the smartest and most interesting creature in the story was a dog.

Ruling above ground today in Arizona are the vapid tenets and myopic vision of Goldwater “conservatism”. Scottsdale names its streets after such dogmacrats. The predatocracy is already firmly established in preparation for the apocalypse now being foreshadowed by Arizona’s most recent economic “malaise”.

Rate Crimes’ midsummer Executive Summary focused on the structural elements of the central analysis of the predatory economics. As the end of the year approaches it is time to recap and expand the list of predations relevant to clean, sustainable solar energy:

In A Boy and His Dog, the protagonist, Vic, is a virile, wide-eyed youth who enthusiastically follows an enchantress into the underworld to discover that he is absurdly valued only for what an impotent society can literally squeeze from him. Happily, his faithful and perceptive best friend comes to his rescue.