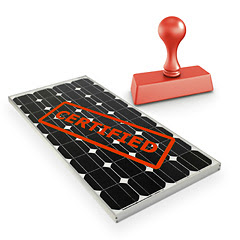 The recent tariff imposed by U.S. Customs on solar modules m ay be interpreted as an act of consumer protection.

However, not every consumer requires the same protection.
Large purchasers of solar energy systems -- such as electric utilities -- are able to protect themselves with knowledge and with their power in the market. Unsuspecting small purchasers are vulnerable to the vagaries of a solar energy industry that is often either owned by, or beholden to large energy companies. Many solar module manufacturers recognize that their immediate, most profitable market is electric utilities. These giants of central planning are proponents first of distant, megawatt solar arrays. Solar companies that are successful in this market sector must produce quality products in quantity, and be able to provide long-term support. This more profitable market sector favors the stronger solar companies.

Newer, smaller and (statistically) more ephemeral solar companies often vie for position in the remaining market sectors that are generally less profitable. Ironically, in our nation’s sunniest state, the repressive rate schedules imposed by the electric utilities help to keep the profit margins in these competing market sectors exceedingly thin.

Many of these newer, smaller companies are foreign or manufacture their modules overseas. In fact, the vast majority of solar modules are manufactured overseas. Some of these modules are substandard and irresistibly attracted to the United State’s unguarded market. Perhaps, U.S. Customs is simply ‘stepping up’?

If we want to protect more vulnerable consumers, then there are better methods than protectionist tariffs. Established, internationally-recognized performance standards exist that provide some assurance of product durability and reliability. Most quality solar module or solar collector manufacturers see these tests as mandatory for their designs. Often, they are mandatory; knowledgeable customers will demand that their purchases are qualified by these standards. ASTM International (originally the American Society for Testing and Materials) has also initiated work on a new photovoltaic module standard. So, why have the most vulnerable consumers been left unprotected for so long?

The testing regimens are quite expensive. The monetary costs for testing a single module design are on the order of tens of thousands of dollars. The costs for a family of module designs can run over a hundred thousand dollars. The tests for a series of unrelated designs can cost several hundred thousand dollars. Obviously, the larger, established solar companies are better able to absorb these costs.

However, the monetary costs of testing pale in comparison to the costs of the time it takes to complete testing. In the best of circumstances, testing can take many months to accomplish. Unfortunately, the solar testing industry is in its infancy. Testing is often performed at laboratories born of academia where they have little understanding of the demands of the marketplace and suffer from a dearth of business experience. An unprepared solar company can be overwhelmed if a crucial module design fails near the end of several months of testing, with only the prospect of another several nervous months of testing a redesign lying ahead; or if a dysfunctional testing laboratory develops a backlog and delays the delivery of the test results.

The industry’s history of boom-and-bust cycles also affects the industry’s ability to address the issue of performance standards. During booms, attention is drawn elsewhere and the swell of new ‘players’ resists anything that might act as a brake on the market. The unprepared testing laboratories have also been easily overwhelmed during booms.

Ultimately, lax protection serves the interests of energy companies who seek to perpetuate their recently consolidated control over the flow of energy by slowing the adoption of locally generated energy.

Because it is so absolutely foundational, the energy market and, more specifically, the solar energy market must adhere to Conway’s Law. The markets must operate efficiently in order for energy efficiency to be realized. Protecting every consumer of solar energy products would be another important step towards this crucial goal.