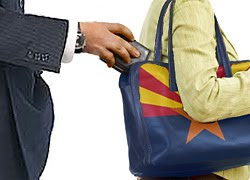 There is a deep chasm in the Grand Canyon State. It is a chasm deepening so quickly as to shame the timeless workings of geology.

The Arizona Corporation Commission’s Renewable Energy Standards and Tariff (REST) rules are an inherently flawed attempt to animate a languid solar industry†. The major flaw is the process by which wealth is extracted and redistributed. Here is how it appears to operate: 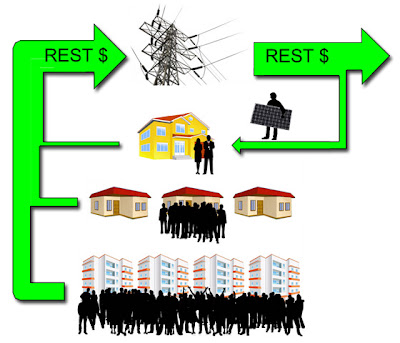 Fees for the REST are assessed on each electric utility bill. All residential “ratepayers” are assessed equally based on monthly kilowatt-hour (kWh) consumption. The fee has a maximum limit. For example, a residential ratepayer is charged 0.3288 cents for each kWh consumed up to a maximum charge of $1.32 per billing period. This limit represents approximately 400 kWh of consumption.

The funds gathered by this scheme are distributed through a rebate program administered by the electric utilities. The funds are distributed to homeowners who possess the discretionary funds to purchase a solar electric energy system. These relatively wealthy homeowners gain the advantage of the rebate programs, escape electric utility costs, and therefore abandon the unfunded citizenry to pay for an ever greater portion of the increasingly expensive energy from the utilities. Furthermore, because they are escaping electricity costs, the solar overclass contributes less to future REST funding!

Can a strong, independent, sustainable solar energy industry be created based on a regressive economic scheme?

†Why the Arizona solar industry has so long remained listless is explained elsewhere in the Rate Crimes energy blog.
Posted by Rate Crimes at 8:22 PM