Arizona, even with its extraordinarily abundant solar resource, delivers only a meager three watts of nominal photovoltaic installed capacity per capita. Three watts for each person in Arizona.

From the inverse perspective, each 100-watt photovoltaic module in Arizona is shared by thirty-three people. The smallest supplemental solar electric system that proves economical for a typical home is approximately 1,000 watts. An Arizona home with ten, 100-watt modules on its roof would feel quite crowded sheltering 330 people. In Arizona today, satisfying the demands of 330 housemates would require a large amount of electricity generated by distant coal and nuclear power plants. 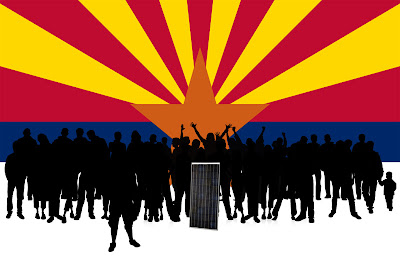 This situation exists today despite the fact that solar electric energy has long been an excellent investment. Repressive rate plan structures have defeated the value of solar energy for many years; and defeated it most for those with the greatest capital resources.