It is crucial that energy costs be accurately accounted in order to establish valid policies. Yet, in any forum where energy is discussed, retail energy costs are typically presented as an average, or as a range of values. Even in conversations amongst economists, engineers, scientists, business leaders, policy makers, and others who help guide our energy future, superficial valuations proliferate. Blunt statements of cost nearly always exclude associated economic, competing, and externalized costs. More dangerously, such simplification disguises a complex and telling reality.

Electricity is sold variously to three major economic sectors: residential, commercial, and industrial/large commercial. Other sectors exist (nonprofit, schools, government, institutional), but sales to these sectors are either peripheral, or resemble the industrial sector. For example, large universities are given discount pricing similar to that enjoyed by large industrial customers. The utilities provide several energy rate plans in each sector.

The salient elements of the structures of electricity rate plans are consumption (obviously), billing demand, (daily) time-of-use, season, basic fees, and subscription. It can be daunting to understand the interactions between these elements that result in the real - rather than apparent - cost of electricity.

Energy consumption is measured in kilowatt-hours (kWh). It is simply the total amount of electricity consumed during the billing cycle (usually, one month). If the rate plan structure has a ‘time-of-use’ component, then electricity consumption can be billed at different rates at different times of the day, and also on different days of the week. Usually, electricity is less expensive during the weekend. Sometimes, electricity is also less expensive on holidays. Prices can also vary across seasons. Seasonal pricing usually depends on regional climate.

If consumption is the steady filling of the pool with a garden hose, then demand is extinguishing a blazing home with a fire hose. It is the interval of peak energy consumption during some day of the month when all the gadgets are turned on. Demand is measured in kilowatts (kW). In the APS E-32 rate plan, the demand is “based on the average kW supplied during the 15-minute period of maximum use during the month.” This 15-minute period may occur at any time, day or night, and on any day of the month. The maximum demand is also likely to change from month to month, and from season to season. 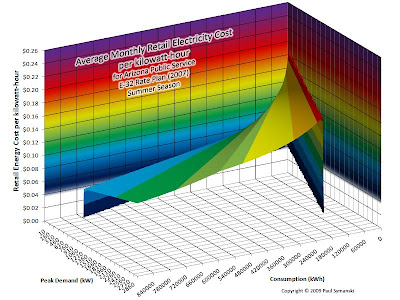 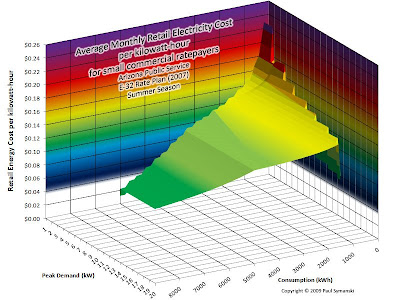 The first chart displays values for the entire 0-to-3,000 kW range of possible demand for the APS E-32 rate plan. Ratepayers with demand greater than 3,000 kW are subscribed to the E-34 commercial rate plan for the largest industrial energy consumers. The second chart displays a very small range of values under the E-32 rate plan below 20kW demand for which the plan has no billing demand component, only consumption. Therefore, the surface slopes only along the consumption (kWh) dimension. Only demand to consumption ratios that fall between ten and ninety percent are plotted. 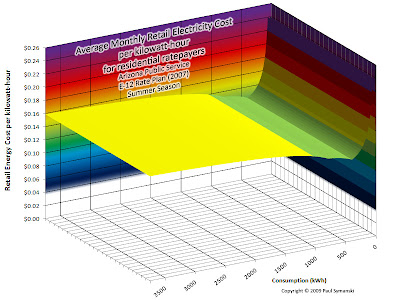 Notice that the slope tilts in the direction opposite to that in the commercial rate plan.

Be aware that the average monthly price at each point is only for a particular billing period. The average price paid during the next month may well be different.