A Comedy of Scale

The annual operating costs for the Palo Verde Nuclear Generating Station are on the order of $350 million. These costs include fuel, maintenance, and operation. The 2009 costs for the distributed energy portion of the Renewable Energy Standard and Tariff (REST) rules are on the order of $17 million. Solar electric energy is only one of many possible components of this $17 million. The costs for the solar fraction are smaller by at least an order of magnitude than the costs to operate Arizona’s nuclear power plant. 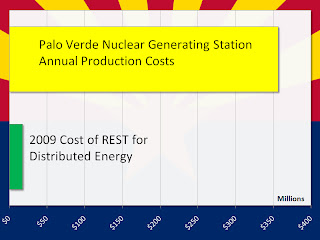 From another perspective, the 2009 costs for the distributed energy portion of the REST are about twice the combined annual compensation for the CEO’s of the utilities regulated by the Arizona Corporation Commission. 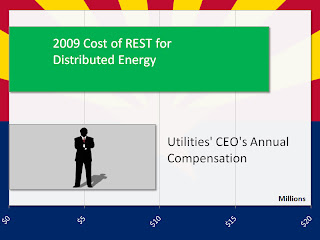 Questions of Constitutional jurisdiction aside, it seems - on the face of it – a rather ridiculous exercise to challenge the value of the REST, and downright laughable to describe the rules as “draconian renewable energy requirements.”

It is difficult to defend a rather disappointing investment in our children’s clean energy future. Yet, for now, ‘it’s all we got’ in a sun-soaked state where dark clouds instantly gather over any faint glimmer of leadership.