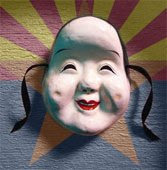 The topics discussed by Rate Crimes, for the most part, have been technical, and somewhat arcane. It has been necessary to lay a firm foundation for the ongoing exposé. This approach may imply an objectivity that is not intended. Rate Crimes attempts to maintain accuracy and to achieve clarity. Objectivity is not a value held dear. After all, how much objectivity should a platform titled, “Rate Crimes”, pretend? Dissent in the face of enormous inertia - not objectivity - is the Grail.

To be explicitly clear, Rate Crimes advocates the rapid adoption of solar energy in order to achieve a simple majority of the energy mix in the American Sun Belt of the Desert Southwest before today’s newborn attain their legal majority. This may afford the next generation the opportunity to bring solar energy to a supermajority of their energy mix, and effectively eliminate toxic sources of energy within their lifetimes.

Because of its extraordinary solar resources, its current toxic energy mix, and a number of other factors, this goal must particularly apply to the state situated at the center of the sunny Desert Southwest: Arizona.

Kabuki Theatre is a more topical discussion that may illuminate the pertinent arguments.

Rate Crimes has criticized the Renewable Energy Standard & Tariff (REST) rules established by the Arizona Corporation Commission (ACC) as being far too generous to the “natural” monopolies ossified into their rigid paradigm of central generation. Considering the inertia faced by the Commission, the REST could be celebrated as a victory. Yet, this slender triumph would be stripped away by forces that might appear to some to be imperceptive.

The Goldwater Institute has brought suit against the ACC on the grounds that “it has expanded its powers beyond its constitutional jurisdiction” by adopting “sweeping new rules requiring utilities to derive a specified share of their power from alternative sources.” The Institute claims that, “The [REST] rules have resulted in rate surcharges to residential and business customers that will total millions of dollars.”

It should also be obvious that, no matter what, terminal electricity consumers (i.e. residential ratepayers), even with the flexibility afforded by home ownership, end up paying the real (and abstruse) cost of electricity through the hidden tax of higher costs for goods and services supplied by the captive and overcharged small business sector. Prestidigitation, indeed. Still, it is surprising that the Goldwater Institute would apparently fail to recognize this, and then blame the scant promotion of solar energy by a few ACC stalwarts as the culprit for what they believe are inordinate and inequitable energy costs.

The Goldwater Institute’s lawsuit reinforces the perception that the ACC is an independent regulatory body. There is much activity generated by the “fourth branch of Arizona government”, but there are few evidential results to confirm this hypothesis.

The Arizona legislature’s creation of the Residential Utilities Consumer Office (RUCO) also reinforces this perception. Even if RUCO has controlled apparent utility costs to any extent for residential ratepayers, it would not be surprising if the costs passed through to hapless homeowners and renters by the subsequently overcharged small business sector did not correlate with the costs for operating RUCO over the past quarter century.

The evidence does show that the ACC is a machine constructed and/or shaped for the purpose of prodigally consuming time in order to maintain a narrowly profitable status quo. These pirates sail seas with quarterly horizons. If the Goldwater Institute was honestly concerned about equitable energy costs, then they would be suing the electric utilities for the multi-million dollar annual compensation packages awarded to their CEOs, or alternatively donating their lawyers’ fees to an energy fund for renters.

In the context of monopoly - nominally “natural”, or not - the chant of “free market” is a tired mantra. There is no free market here. There is central planning. The only question that remains is, “Who does this planning serve?” As has been said here before, rate schedule design, as a central tool of energy policy, is the design for society; at least, for a society with seemingly unbounded appetite.

So why is the Goldwater Institute injecting themselves into this elaborate and bewildering dance of masks and hidden meaning? Is it to constrain an unruly performer who has broken character? Was even a slight promotion of solar energy too much to countenance? Is RUCO too ineffectual in their role to any longer maintain the illusion? Is the Institute performing under their own illusion that their ‘free market’ faith represents salvation? Is the Institute the narrative voice standing outside the action to reveal to us the antagonist’s motivations of extraction and distraction? Are the only protagonists present in the theater sitting in the audience?