Electricity is often sold to ratepayers in variously priced ‘blocks’. In any plan but the rudimentary “flat rate” plan, each block (but the last) has an upper limit on the amount of electricity purchased at that particular price. Each block may be limited by a fixed amount or calculated based on a multiplier. This multiplier is often based on billing demand.

In a declining block rate structure, the initial amount of energy that you purchase from the utility is the most expensive per unit of energy. The electricity in each one, or more, following price blocks is less expensive than that in the prior block. Some utilities tout this as a “volume discount.” 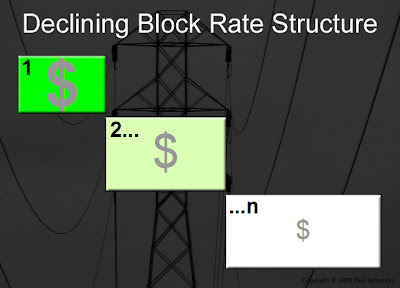 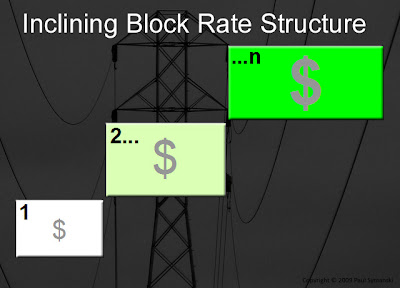 The slopes of the surfaces in the Rate Crimes visualizations are artifacts of the corresponding declining and inclining block structures of the rate plans. In the retail electricity cost visualizations, each value is the summer monthly average retail cost of electricity for a particular amount of consumption and a particular billing demand. It is important to recognize that each plotted value is an average of the cost of electricity from multiple price blocks. 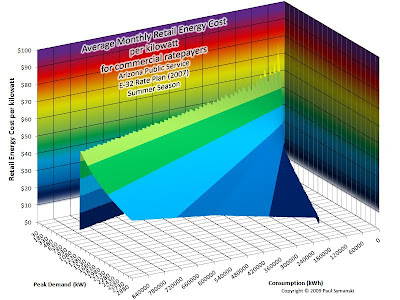 In the visualization for the Arizona Public Service (APS) E-12 standard residential rate plan the slope climbs as consumption increases. There is no demand component in this rate plan.

Block pricing is one technique that allows for rate plans to be structured in order to pursue economic, social and political goals.