Rate Crimes exists to explain how and why the tipping point for solar energy has been stalled for at least a decade. Because solar energy has myriad benefits, it is crucial to the future of our society. Any intentional delay of its widespread adoption is a crime of national and even global consequence. Arizona sits at the center of the Sun Belt in the American Southwest. Arizona today is air-conditioned predominantly with coal, gas, and nuclear energy. It is unnecessarily a generator of enormous entropy.

Note: Full resolution versions of all the images may be viewed by clicking on the thumbnails.

The bulk of Arizona’s population is centered around its capitol city, Phoenix. Phoenix is situated in the Sonoran Desert below the mountains to the north and east that provide much of the water that slakes the thirst of nearly five million people living in what is commonly known as the Valley of the Sun. The Valley enjoys an average of 334 days of sunshine per year. The average high temperatures are over 100 °F (38 °C) for almost five months each year.

These millions and the sweltering summers put a demand on the electricity grid that peaks at above ten gigawatts. The population’s monthly average peak demand for each hour of the day varies each month. 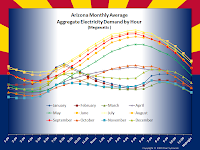 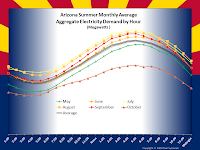 The winter months of November through April also have a consistent demand pattern that is relatively flat with two small maximum demand peaks that occur at about 8:00 a.m. and 8:00 p.m. 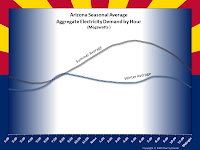 Solar energy could play an important role in diminishing demand. 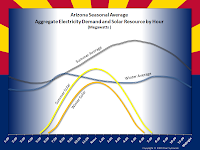 However, solar today supplies only a miniscule portion of the energy required to meet an enormous demand. 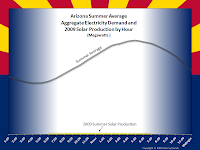 The peak availability of solar energy precedes the summer maximum peak demand by as much as four or five hours. Until energy storage becomes less expensive, even west-facing solar arrays cannot resolve this issue. Much of this delayed energy consumption is due to thermal lag. Heat is absorbed by buildings and their surroundings during the hottest time of the day. This heat must be shed to maintain interior comfort. Today, much of this cooling is accomplished by burning coal, gas, and uranium to power electric cooling systems. Much of this cooling need is due to structures that are poorly designed, and poorly oriented for the desert environment. There has also been lack of attention to exterior energy management solutions such as shade trees. 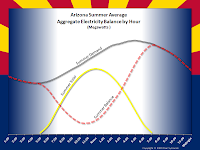 The same situation exists during the winter but at a much lower level. 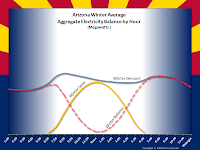 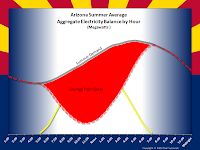 The electric utilities serve their purposes by focusing on the difference between the maximum peak demand and the current inability of solar energy to lower it significantly. However, the rate schedules of these very same utilities not only directly defeat the value of solar energy but also defeat it indirectly and doubly by diminishing the value of energy management solutions that would lower the peak energy demand. 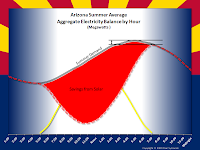 Rather than promote solar energy at the very center of the Sun Belt, the Arizona electric utilities and their partners have chosen to squander limited, unmanageably toxic, and increasingly expensive resources for immediate gain rather than to extend the availability of these resources to future generations who might use them with greater wisdom.