Rate Crimes exists to explain how and why the tipping point for solar energy has been stalled for at least a decade. The economic legerdemain is subtle, but its purpose may become clearer if we gaze into the future. The chart below displays the mix of sources of electric power in Arizona from 1990 to the present, based on Energy Information Administration data. The trends for electricity fuel sources are projected to 2030 based on Arizona Department of Commerce estimates for population. This is what the next generation of Arizonans can expect in 2030: 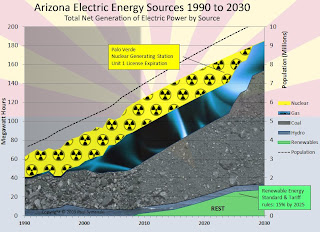 Several assumptions should be declared: First, it is assumed that energy consumption follows population. Circumstances can be imagined where this might not hold, but population correlates with both energy generation and consumption over the past twenty years. It is possible that when the population is increasing then more energy is consumed due to ‘thrashing’; and that when population stagnates a decrease in energy consumption per capita could result. Be that as it may, the Arizona Department of Commerce predicts that the population will continue to increase at its current rate.

Second, it is assumed that the rate at which energy efficiency improves will continue at its current pace. Even if the rate of efficiency improvements increased, then Jevons Paradox suggests that overall consumption might not decrease.

Third, it is assumed that the rate of natural gas consumption will slowly decrease due to cost and/or availability.

Fourth, it is not assumed that the first unit (of three) at the Palo Verde Nuclear Generating Station will begin decommissioning in 2025. It is very likely that the reactors will be relicensed and then continue to operate for another few decades. The results of decommissioning are displayed to reinforce the eventuality within our lifetimes.

If hydroelectric, and gas sources remain constant or diminish, then from where will the additional energy come? There are three contenders: nuclear, coal, and renewable energy. For the purpose of exhibition, I have emphasized coal. However, barring any real and rapid success with carbon sequestration, the evidence is mounting against brown coal as anything more than a way to stoke a global furnace.

The nuclear industry has recently been seeking a renaissance. However, after half a century of operation, nuclear energy still requires enormous subsidies and has not proven to be economical. The costs aside, even the morality of producing large amounts of undisposable, perpetually toxic waste is questionable.

The Arizona Renewable Energy Standard and Tariff (REST) is the program for renewable energy in Arizona established by the Arizona Corporation Commission. Despite extraordinary efforts by a too few, the best the REST rules can accomplish is to be a hopeful catalyst. Even if the REST rules inspire the electric utilities to accomplish all the program’s goals, Arizona will not be enjoying a clean energy celebration at the sunset. Arizona, situated at the center of the solar Sun Belt in the American Southwest, will be keeping the air conditioners blasting in 2030 by burning two to three times the amount of coal it is today.